August 08, 2008
Hello World! Welcome to Codecurry. It is a privilege to post the very first entry for Codecurry, a blog focused on providing technical briefs on Rich Internet Applications, software technologies, computers and communications.

My name is Sameer Gupta, I'm an Adobe Certified Professional and an entrpreneur. I work with Atos Origin and my tenure with them ends on 14th August '08. I am looking forward to give complete focus to my business plans and a lot of time to Codecurry.

My twin brother Sagar Gupta, again a Certified Adobe ColdFusion MX 7 Advanced Developer [and technology entrepreneur] will also share his thoughts on Adobe technologies in this blog. He has worked on many ColdFusion and Flash projects, and is currently heading the development of JustTring.com - Flex RIA which will enable video calling.

Atos Origin, if you are not aware, provides infrastructure that powers Olympics and since the Game opens today, it must be obvious why Beijing Summer Olympics for a Hello World introductory post.

Beijing Olympic Games videos are available on Beijing 2008 channel in YouTube at http://www.youtube.com/beijing2008. You can also visit http://www.nbcolympics.com/, to the catch the action LIVE.

Sagar and I chose yesterday this day as the launch day for Codecurry because it is very special to a lot many people. In fact, the summer Olympic Games in Beijing began on 8/8/8, at 8:08 p.m.

The date is not just catchy but has a lot meaning to the Chinese. Fame and good fortune is more often associated in China with eight, a number which is associated with positive meanings in Buddhism and Taoism, as well as in Japanese Shintoism.

Jack Tresidder has an entry on eight in his books of symbols: The eight sided form of the Christian baptistery is a symbol of rebirth to eternal life. The octagon was perceived as a form of mediating between the square and circle which represent the earth and the heaven respectively and therefore implying a spiritual rite of passage. In the arcane of numbers, eight was itself a symbol of renewal... The Chinese pronunciation for eight (ba in Mandarin and paat in Cantonese) sounds similar to the word for prosperity (fa in Mandarin and faat in Cantonese). Numbers play a large role in choosing a date for any special event in China (as well as in India).

Numerology is a big hit in India. Tough we aren't into any numerology we decided to launch Codecurry on this day since a lot many people are hoping to bring them luck. Just think about this, 8/8/8 will witness more marriages than any other day in China this year. Those couples are putting so much hope on the 8/8/8. The Chinese planned and scheduled the Olympic Games on this day and began the Opening Ceremony exactly at 8:08 p.m. So, it does make a lot of sense to align yourself with such hope for success and good fortune.
Codecurry General Olympic 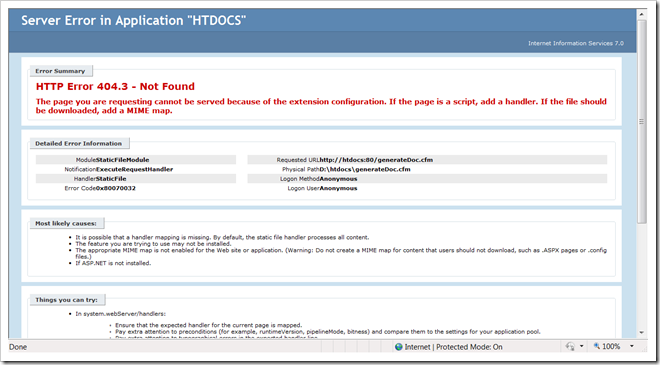 When installing ColdFusion on Vista or on Windows Server 2008 you may receive HTTP 404.3 Error, similar to this one: HTTP Error 404.3 - Not Found The page you are requesting cannot be served because of the extension configuration. If the page is a script, add a handler. If the file should be downloaded, add a MIME map. Additionally if you run ColdFusion Web Server Configuration Tool, you will see a message saying that IIS components are being installed and could take between 2 to 5 minutes of time. You can resolve this error by making sure that the two required components of IIS are installed on your system. Namely: ISAPI Extensions IIS Metabase and IIS 6 configuration compatibility.
Click to Read Complete Article » 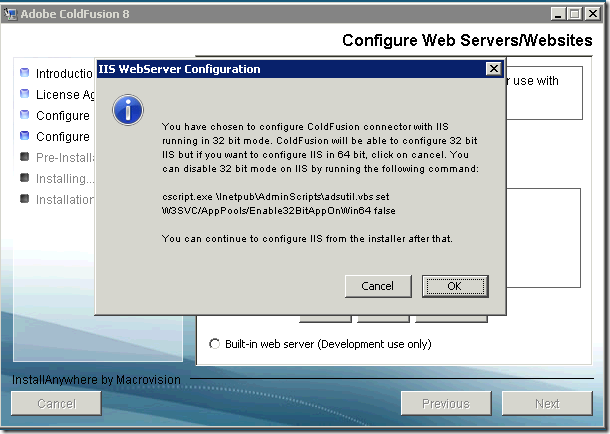 ColdFusion works by configuring your web server (IIS, or Apache) to execute files with known extensions (.cfm, .cfml, .cfc et al) to run as script. And for doing that ColdFusion comes with a small and important tool called “wsconfig”. Problem: At times, regardless of operating system and the web server you are using, the ColdFusion installation will fail to configure web-server due to your network settings or firewall/security settings. When running wsconfig tool, you may encounter errors similar to the following: Could not connect to any JRun/ColdFusion servers on host localhost. Possible causes: Server not running - Start Macromedia JRun4 or ColdFusion server Server running - JNDI listen port in jndi.properties blocked by TCP/IP filtering or firewall on server - host restriction in security.properties blocking communication with server Snapshot above shows one of t
Click to Read Complete Article »

October 09, 2013
When you want to use Apache Tiles, you will find that your tiles are cached and are not refershed when you reload the page in web browser. This is a non-issue in production environment because once your webapp is deployed in production you never change your Apache Tiles templates and pages. However, in a development environment this is cumbersome since you will have to redeploy your webapp each time you make a change in your templates. I faced a similar problem recently and the I found out the I could use the ' useMutableTilesContainer ' property in  TilesConfigurer  class and the ' cache ' property in  TilesViewResolver  class. You configuration should look something like this:        <bean id="tilesConfigurer" class="org.springframework.web.servlet.view.tiles3.TilesConfigurer">           <property name="definitions">              <list>                 <value>/WEB-INF/path-to-your/tiles-definition.xm
Click to Read Complete Article »